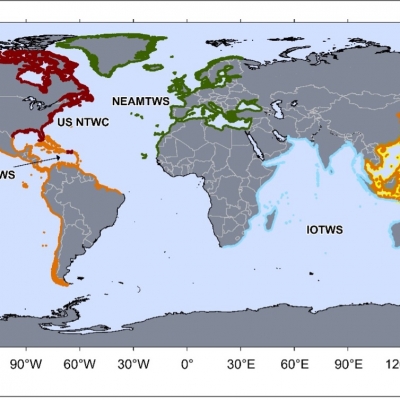 NEAMTHM18, the first tsunami hazard model for the Northeast Atlantic, the Mediterranean Sea and connected seas is online

The first hazard model for tsunamis generated by earthquakes in the NEAM area, the resultof a European project coordinated by INGV, has been realized. To quantify the tsunami risk for the Mediterranean coasts, an international team of researchers brought about the first earthquake-generated tsunami hazard model for the whole NEAM area (Northeast Atlantic Ocean, Mediterranean Sea, and connected seas up to the Black Sea).

This model, named NEAMTHM18 (NEAM Tsunami Hazard Model 2018), is the main product of the European Project TSUMAPS-NEAM, coordinated by the National Institute of Geophysics and Volcanology (INGV).

NEAMTHM18 is of particular interest for Italy, because it has been used as a basis for Civil Protection planning along the coasts of the country, also to manage public evacuation in response to a possible tsunami alert issued by the “SiAM”, the National Warning System for Tsunamis generated by seismic events to which the Tsunami Alert Center of INGV (CAT-INGV) is part.

In fact, last March 18, offshore Sardinia and the Balearic Islands a moderate-sized tsunami was detected, due to the 6.2 magnitude earthquake recorded by the INGV National Seismic Network offshore the Algerian coast.

Moreover, this tsunami wasn't the only one that occurred in the Mediterranean area. Just a few months earlier, on October 30, 2020, a 7.0 magnitude earthquake with the epicenter in Samos, Greece, produced a tsunami in Samos and Izmir, causing damage both in Greece and Turkey where, moreover, a fatality was recorded due to the tsunami.

Figure 2: Example profiles of the maximum inundation height (MIH; mean and the epistemic uncertainty represented by the 2nd, 16th, 50th, 84th, and 98th percentiles) along coastlines among those with the highest hazard of the NEAM Region. The two profiles span coast of the Gulf of Cadiz (N–S) and the Cyrenaica (E–W). Both profiles are with reference to the hazard model with the 2% probability of exceedance in 50 years (average return period of 2,475 years). The color scale in the map is as in Figure 11. Topo-bathymetry is from the ETOPO1 Global Relief Model (NOAA, 2009; Amante and Eakins, 2009).

“In the NEAMTHM18 model, tsunami hazard calculation for the studied coasts was structured in four stages: the development of the probabilistic model of earthquake occurrence; the numerical simulation of tsunami wave generation and propagation in the open sea; the statistical modeling of the inundation probability; the aggregation of the different stages aimed at quantifying hazard curves”, Roberto Basili, Coordinator of the TSUMAPS-NEAM project for INGV and first author of the paper, explains.
The hazard curves provide estimates of the probability that a tsunami of different heights will strike the NEAM coast in the future. The model is presented by also expressing the uncertainty that characterizes these hazard estimates, with a sort of “error bar” for each of the estimated probability values.

“Indeed, it is worth recalling that the hazard values presented in the NEAMTHM18 model were quantified using a modeling technique that considered alternative data and approaches, following a formalized decision-making process based on a multiple-expert protocol. This procedure allowed us to transparently integrate the experts’ opinions from different disciplines, which are the expression of limitations of available data and their different interpretations within the scientific community”, Basili adds. “Therefore, the model provides a family of hazard curves represented by the mean value and various percentiles of the so-called epistemic uncertainty, that is the uncertainty related to our level of knowledge of the phenomenon in question”.

“The choices made by DPC to formulate coastal planning guidance took these uncertainties into account and introduced 'safety factors' accordingly”, the researcher continues. “Besides, events with an average return time of 2,500 years were identified as a reference for planning, as New Zealand has already done. This choice reflects that tsunamis are relatively rare events with the potential to cause severe consequences. It should be noted that the average return period is greater than the 475-year average return period considered by the building codes for seismic hazard, which refers to more frequent events”.

2,343 points of interest (POIs) distributed along the NEAM coastline at an average spacing of about 20 kilometers were considered in the definition and calculation of hazard curves. Starting from these curves, maps of probability for different levels of maximum flood height (MIH) and hazard maps for different values of the average return period (ARP) can be made. Several examples, including the necessary documentation, can be found on the model website, accessible through a dedicated interactive tool.

Analysis of the hazard curves shows that inundation values of several meters are possible in the NEAM area. “Specifically, in 37% of the hazard locations in the Mediterranean Sea, an event exceeding a 1-meter inundation height could occur on average every 2,500 years. The points where even greater heights could be more frequent are on the Libyan, Egyptian, Cypriot and Greek coasts, as well as on the Italian coasts of the Ionian Sea. In the northeast Atlantic, the points characterized by a relatively high hazard are located on the coasts of Mauritania and the Gulf of Cadiz. In the whole NEAM area, also considering the coasts of the Black Sea and the Atlantic Ocean, in 30% of the analyzed points we can have in the same time interval inundation heights higher than 1 meter”, Basili explains.

While NEAMTHM18 represents the springboard for starting more detailed local hazard assessments and subsequent risk analyses for tsunami-generated inundations in the NEAM area, it has already been used as a basis to help design evacuation maps for the National Tsunami Warning System.

Link to the full article